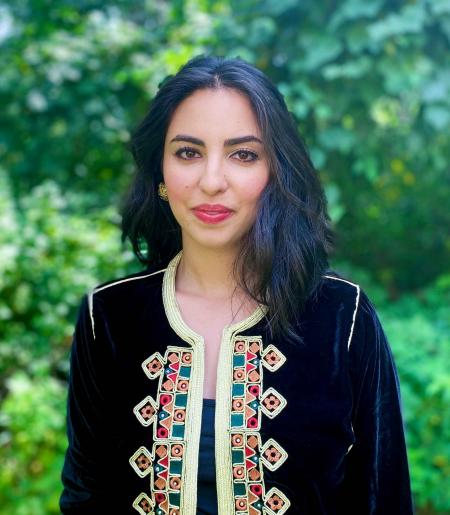 Imane Terhmina is Assistant Professor of Francophone Studies in the Department of Romance Studies. She holds a PhD in French Literature from Yale University. Her research lies at the intersection of aesthetics, ethics, and politics. Areas of specialization include: Francophone African literature and culture, postcolonial theory, affect theory, political philosophy, petrofictions / eco-topias, Afropolitanism.

Prof. Terhmina’s research broadly explores conceptions of Africanness that critically interrogate the relationship between Sub-Saharan Africa and the Maghreb. Her first book manuscript traces the ways in which Francophone literature and film from North, West, and Central Africa articulate a mythopoetics of bureaucracy. It demonstrates how the staging of bureaucratic encounters individualizes and allegorizes the relationship between state and civil society, in order to illuminate procedural injustices that are bound up with broader political and ethical issues, including immigration, competing conceptions of legal rights and citizenship, and ecological anxieties. Ultimately, her research seeks to show the ways in which African experimental fiction intimates alternative political imaginaries. Her second project will examine African literary and artistic works through the lens of petromodernity.

Imane Terhmina is currently an Assistant Professor of Francophone Studies at Cornell University. She holds a PhD in French from Yale University. Her research lies at the intersection of aesthetics, ethics, and politics. Her areas of specialization include: Francophone African literature and culture, critical theory, political philosophy, petrofictions / eco-topias, and non-western modernities.

Can bureaucracy, which constituted the primary tool of colonial political domination, become the instrument of collective repair post-independence? How do bureaucratic proceedings reveal the nature of justice, and particularly the relationship between its retributive, punitive impulse, and its restorative aim? My first book manuscript explores these questions in order to probe the complex relationship of justice to both violence and rehabilitation. It examines the narrative trope of bureaucracy in African Francophone literature, from Algeria and Morocco to Senegal and Mali, as a nodal point through which civil society and state can come into violent but also dialogical contact.

At its core, Bureaucratic Affairs contends that the bureaucratic encounter is at once a confrontation and a mediation: it holds both the potential for violence and the possibility of its repair. On the one hand, literary bureaucratic encounters demonstrate that the bureaucratic order continues to be a primary means of ordinary, institutional violence. By tracing thisnarrative paper trail, and its mapping of exclusion, policing, and the differential allocation of privileges, these texts illuminate a fundamental procedural injustice.

On the other hand, bureaucracy is the mechanism through which democratic change is legislated into reality and maintained. Consequently, bureaucracy contains the possibility of transcending its own violent legacy. Bureaucratic dialogues are depicted by some African authors I examine as the basis of an ecological utopia, integrating green politics and tribal structures to imagine a new form of participatory democracy. Others consider it the basis of what normative feminist theory defines as an “ethics of care,” along with the South African indigenous cosmology known as the concept of ubuntu. In doing so, African literature also methodologically operates an epistemological repair: it reconciles western and African political imaginaries that have traditionally been seen as incommensurable.